Follow To say nothing of the cat on WordPress.com
Advertisements

People are reading this:

Check out the Archive

No, I didn’t go completely crazy and no, I am not turning “The Cat” into a food blog in order to get more clicks.

This post will just be some kind of playful intermission between all the travel stories, courses, movies and games reports. It’s the recount of how, together with my family, we made an epic-level Spaghetti alla Carbonara for 30+ people, in August 2016 in Sermugnano. Back then we were hosting a youth exchange, a hilarious experience named “Street (He)art”, but that’s another story.

Want to know all the ins-and-outs of such an easy to learn, hard to master classic of the Italian cuisine? Then you just have to read on.

Many friends around Europe (and the world, really) have sooner or later encountered this plate. The problem is, in many cases what you get on the Continent or in the USA is very different from the Italian traditional recipe. Which is, I mean, fair enough: it hurts to enter a restaurant on a beach in Thailand and discover that they put milk cream and peas in their “carbonara”, but hey, after all people are free to eat whatever they want.

Then, a few months ago, this video went viral on the internet. And it was simply too much:

Seriously, this thing was really big in Italy. Some media named it the “carbonara gate”. And they were only half joking. For a few days it was the trending topic everywhere. Yes, it leverages on the ancient rivalry between Italians and French over who can boast the best food (and wine, and football, and everything else actually). But it also draws from the fact that if there is one element of their culture that the Italians are not willing to compromise, that is food.

Actually here is a tip for any speaker who faces a group of Italians: just mention the name of any traditional recipe in a room, and it will be buzzing with opinions, many of them proclaimed with the my-way-or-nothing attitude. I mean, people are ready to spill blood over the secrets of a traditional recipe. You will have to do some conflict management afterwards, but at least you can be sure you got everybody’s attention. It also works with coffee, pizzas, and so on.

Why all this? If you ask me, I think it has to do with the fact that food remains one of the very few aspects of the traditional Italian culture that people can still proudly defend, is easily accessible, and more or less universally appreciated. So take away our football, our fashion, our artistic heritage, but hands off our lasagne. Or else. 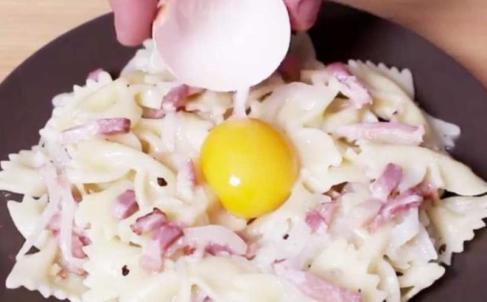 But back to the topic, what is wrong exactly in this way of cooking pasta?

In one word: everything.

There are a few crucial mistakes one can make while preparing the Carbonara, and this video makes them all. Now, every time someone cooks pasta this way, an Italian fairy dies. Really. Don’t do it.

And also, please, don’t do the one-pot pasta thing. Like, ever.

If you only have one pot, please get another pot. To the average Italian (=me), “one-pot cooking” sounds like “I don’t have time and I don’t want to invest resources, but I want to cook something with a fancy name”. And what is worse, I will put the video online.

I could go to great lenghts discussing the reasons, some of them having to do with family traditions, culture, and the part of cultural stereotypes that people love after all. But to make a long story short: just trust me on this one.

So, now that we know what not to do – can we see how to make the real thing?

Yes! Just a moment for two quick disclaimers. Because you know, internet is a dangerous place.

Disclaimer one: for Italians (mostly). I know there are different variations. Most controversy is about the egg. This is the way I do it, it’s been approved by authentic Romans and by all sources I read. If you disagree, give me some slack.

Disclaimer two: no, it’s not vegetarian / vegan. It’s a dish from an old rural tradition, when such concerns were not present. I am not judging it. It’s simply a fact.

So, having said that, let’s see it!

1 – Pork cheek is better than just bacon (but sources disagree). It’s “Guanciale”, in Italian. What’s the difference? Guanciale is fatter, tastier, better. If you cannot find it in your local shop, go for well seasoned, smoked bacon, with a nice fat part. And know that it will not be the same thing. Quantity: around 50 grams per person – more if you want it to be tastier.

Chop it in small cubes like in the picture above or in thin slices.

Fry it in a pan, using just a bit of olive oil as a base. The pork fat will melt (and it will be used later) and the meaty parts will become crispy and delicious. Don’t stop until the bits are golden / brown and crunchy. 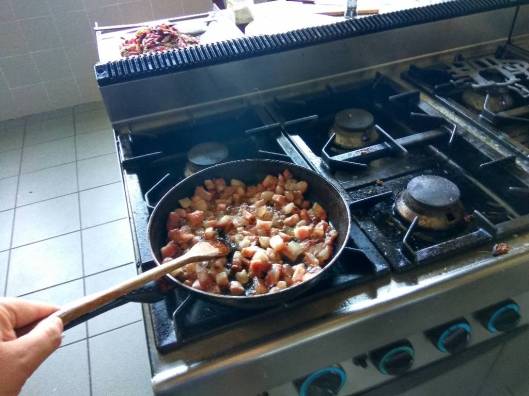 Add grated pecorino (sheep cheese). Some prefer a mix of parmigiano and pecorino, but pecorino adds a more intense taste.

Add salt and pepper. Crush the eggs and mix it all together. This will be used later.

3 – Prepare the pasta. Spaghetti are the natural choice. By the way: it’s SPAGHETTI, you pronounce the “Sp” like in “Specialty”. Not like “ashtray”. Think which one you would like to eat.

You can also use penne, rigatoni, bucatini. Farfalle (like in the one-pot infamous example) don’t feel appropriate. Don’t ask me why, it’s like pineapple or chicken on pizza. Just no.

4 – The Water. I couldn’t possibly stress this point enough: BOIL THE WATER ALONE!

A lot of people from all over the world make this common mistake: put pasta in the cold water, turn the fire on, wait. This is wrong. Why? For the same reason you want to wait until your oil is really hot, before frying some chips. Boiling water will treat your pasta real nice, and make it “al dente” (= to the tooth), which is just the way to please your guests, or yourself, when cooking Italian.

When water is boiling, but really really blop-blop-blop kind of boiling, drop the pasta. Got it?

Don’t disappoint Angelo on this point. 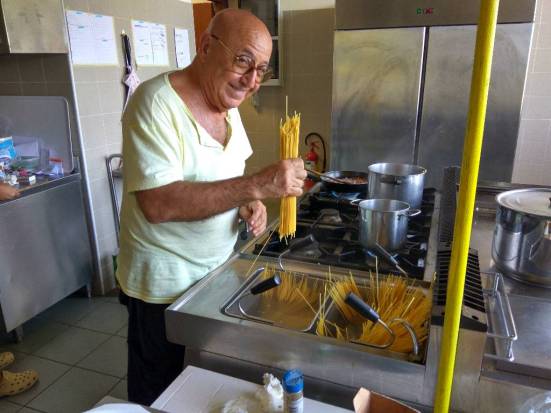 Salt the water. It’s important because pasta will be tastier by itself, and complement nicely the flavour of any sauce.

Wait. Each type of pasta will have a specific cooking point. It’s usually written on the package. 30 minutes of boiling is absolute madness. It can be anywhere between 7 to 15 minutes. There is only one way to be sure if you are getting it all right:

In the meantime, you can prepare the serving dishes – or in this case, trays. You can start by creating a first layer of sauce. Mix the pork cheek (with its melted fat) and some egg sauce. Please note that the egg is still raw at this point.

5 – Drain the pasta. Ideally, when it’s just “al dente”. This means still a little harder, crunchy. The perfect point changes according to taste. But if everything is done to perfection, each single spaghetti will ideally be separated and you don’t have the sticky glueish food ball that every Italian intimately knows as wrong and innatural. 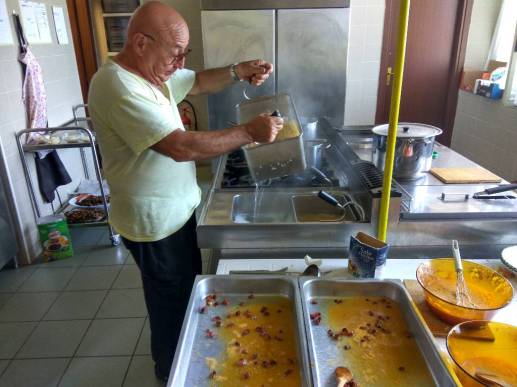 You can mix it with the sauce.

Make sure you don’t drain ALL the cooking water. It’s salty, it contains gluten, it will help the condiment to stick together and to become a delicious sauce.

Please notice this is not happening on the fire. Some people do it still in the hot pan, in this case I didn’t – because I didn’t have a big enough pan. The hot pasta and the remaining boiling water will “cook” the raw egg sauce, just enough for it to be perfect.

You definirely want to avoid having pasta with omelette, which is what happens if you mix the eggs and pasta in a frying pan with the fire still burning.

This was for 30 people, so we used 3 kilos of pasta, 32 eggs, half a kilo of grated cheese, almost a full kilo of seasoned pork cheek. Total time of preparation, all included, 30-40 minutes (consider cutting the pork and crushing the eggs, in such quantity, takes time).

11 minutes later, it was all gone. 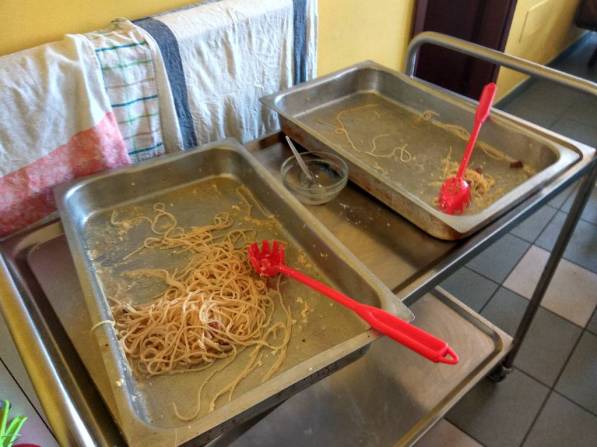 And that’s about it!

No trace of milk cream in the traditional recipe, no onion, no funky business et voilà with the raw egg on top.

And most of all, no one-pot-boil-it-all-together madness. That’s just wrong on so many levels.

There are variations (like this one, made with fish instead of meat) that are allowed, because they still keep intact the respect for the tradition.

And if you are looking for a video tutorial, I found this that can do the trick. It’s that easy, really.